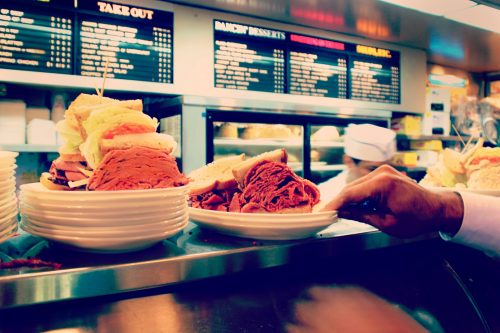 The pastrami sandwich is one of the most favorite sandwiches in the city of New York, most likely due to the main ingredient of the sandwich; pastrami, and also the cherished new York style of preparing pastrami sandwich. Pastrami is meat gotten from beef brisket or can even be gotten from lamb or turkey. It is age-long meat, which made its way into New York in the 1880s, as repayment of favor from a Romanian friend to his Lithuanian friend Sussman volk. They are seasoned with spicers then smoked or steamed. They come cooked already, therefore can be consumed immediately, but most people prefer using theirs to make a sandwich.

Now let’s take a look at how to make a New York-style Pastrami sandwich.

Basically, a pastrami sandwich contains about 28 grams of total fat, 166 milligrams of cholesterol, and 628 calories. It also contains 57 grams of protein, beating the normal recommended value of protein daily. The rye bread provides a high amount of salt intake, containing up to 2000 milligrams of sodium.

The pastrami sandwich also offers 5 micrograms of vitamin b12 and up to 39 micrograms of vitamin b6. Both are essential in maintaining a functioning nervous system, healthy skin and also reducing the risk of having heart disease. Vitamin b12 is also essential in the development of cells, which is very important for children. Other vitamins gotten from the pastrami sandwich include vitamins A, E, D, and K.

A new York-style pastrami sandwich is surely one healthy meal to try out.